The Five Senses
is an anthology of short stories and memoirs published by www.blurb.com and written by seven amazing women, all members of the Writers’ Circle of Andorra.

The stories range from funny to macabre, science fiction to crime.

Patricia Grey’s "Lost on Interstate 80"  pursues a victim of domestic abuse as she tries to lose herself in the midwest of America.

In "Transitions" a country boy comes to the city to pursue the object of his desire and change his life.

"Harsh Times" is a fable about the vicissitudes of bad economic times in France.

"Juggliing the Verdict" introduces us to Detective Bailey of the West Australian Police Force. A rape trial is derailed by the victim's suicide.

In the stories and memoirs of Patricia’s six fellow authors whose work features in the anthology, "The Temptation of Ocean" examines the restrictions of life on a spaceship.

"Points of View" exposes the differing viewpoints of a bride and her mother as the wedding approaches.

In a reminder of how stories speak to our everyday lives, Alas no Keys follows the writer as she searches for her lost keys.

"Double Trouble on the Karakoram Highway" is an excerpt from Jeanne de Ferranti’s memoir of her travels around the world in a mini.

Margaret Shaida writes of her life in Iran during the 1970s in her biographical story "20:20 Hindsight"; and Clare Allcard has penned an absorbing companion piece on Shaida’s husband, Hassan, and his many changes of successful careers in "Hassan Shaida, West Asia’s multi-faceted man."

This is just a taste of the 32 original tales in "The Five Senses" . 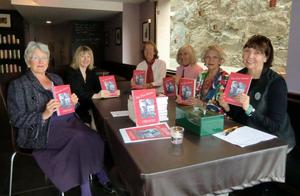 PATRICIA GREY: Born in Australia. Has lived in Andorra since 1996. Her first book Death has a Thousand Doors, a mystery set in Andorra, was a finalist in the 2010 Proverse Prize. Interests: skiing, hiking and Bridge.

MARGARET SHAIDA: Born in UK 1935. She joined the BBC at 19. There she met Hassan. They married in 1955 then went to Tehran where she became woman’s editor of a new, English-language newspaper, Keyham International. On returning to the UK in 1980 she wrote “A View of Henley  on Thames” followed by the award winning “Legendary Cuisine of Persia”. They moved to Andorra in 1991.

JUDITH  PENELOPE WOOD: Hatched in 1946 in Bombay. Matched in 1988 in Andorra. Dispatched remains to be seen. Convent educated where books were frowned upon and therefore learnt to write turgid teenage stories to meet her addiction to fiction. Career varied but un-illustrious. Interests varied but healthy. Aspirations immense and delusional.